The Vice President of the Republic of Sierra Leone Dr Juldeh Jalloh has inaugurated the Youth Advisory Group (YAG) which was formed by the Ministry of Basic and Senior Secondary Education (MBSSE) with support from Plan International Sierra Leone.

This took place on Wednesday 18th May 2022 at the Bintumani International Conference Center in Freetown.
In November, the Minister of Basic and Senior Secondary Education Dr David Moinina Sengeh during the COP26 Summit in Glasgow, made a commitment to establish a Youth Advisory Group in Sierra Leone.

The Youths Advisory Group comprises twenty (20) young people; one from each district which total of sixteen and four from special needs youths (children with disabilities; children from low-income families; children in rural and underserved areas; and girls – especially girls who are currently pregnant and in school or are parent learners).

“The Youth Advisory Group will be a pillar in supporting all major decisions about education in Sierra Leone and will serve as an important accountability mechanism within the ministry. The ministry is providing services to nearly 3 million people, which is close to 50% of the country’s population. It doesn’t make sense if young people are not part of the architecture of the MBSSE’s decision making. We are starting small with the Youth Advisory Group, which will be the first of its kind in the government of Sierra Leone. I am excited to legalise the YAG in the new Education Act,” according to the Minister.

Meeting the YAG for the first time in a roundtable discussion, the youths shared with the minister their motivation for being part of the group and how they intend to contribute to issues relating to the well-being of themselves and their colleagues.
Issues relating to teachers and teaching were also discussed during the engagement.

The Country Director of Plan International Sierra Leone Mr Evariste Sindayigaya said for Plan, they recognized that by not including young people in their planning and decision making processes, everything they do including governance they are losing huge opportunities, not only in terms of legitimacy or the value of decisions they make but also the unique perspective that young people bring to their work.

“Young people, the future will be kind to you if you contribute to writing it, and I can’t be more excited today to say that the Honorable Minister and the leadership of the Ministry have given you a platform to join them in writing your own history, your own future, therefore do not underestimate this opportunity,” he said.

He said their responsibility with support from MBSSE is to make sure that they develop together pathways of young people into leadership, and it is towards this objective they will direct their effort, energy and resources.

“I want to make a commitment that Plan International Sierra Leone will continue to make sure that the voices of young people are heard and are valued,” he said. 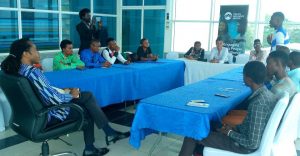