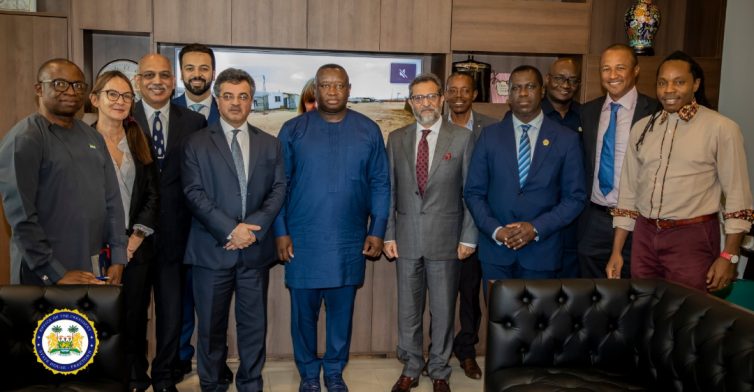 His Excellency President Dr Julius Maada Bio has met with members of the Global Education Management System, GEMS Education from the United Arab Emirates, UAE and discussed plans on improving the educational sector in the country.

GEMS Education is a global advisory and educational management firm, known for its prominence in operating from kindergarten to high schools across the world. Through its consultancy arms, GEMS Education Solutions, the company works internationally with public and private sector clients on school improvement initiatives. It was founded in 2000 and headquartered in Dubai, UAE.

Presenting the delegation at the State Lodge on Hill Station, Sierra Leone Ambassador to the UAE, Rashid Sesay, said that they were in country on a fact-finding mission in the education sector, the government’s flagship programme. He said that GEMS had expressed interest to assess what was happening in the country and noted that the visit was a highlight of several discussions with their UAE counterparts.

Minister of Basic and Senior Secondary Education, Dr Moinina David Sengeh, said that his ministry had done a lot of preliminary work that were data-driven, underpinning government’s strategy for education. He stated that his team had done some background and research work in preparation for the visit, while assuring that they were ready to work with the visiting team to have definitive answers at the end of the trip.

GEMS Global Head of Mergers and Acquisitions, Asad Zafar, said that they were pleased with the warm reception accorded them since their arrival into the country, adding that they were delighted to be in country to commence the fact-finding mission.

He expressed excitement about the prospects in Sierra Leone and President Bio’s passion for education and were happy to join the country to make a difference.

Special Adviser to Founder Varkey Foundation and GEMS Education, Shantha Retnasingam, said that: “My prime aim here is to work with the Sierra Leonean team to identify how we can mobilise resources for the various projects which we will be looking at. We are happy to be in this country”.

In his response, President Julius Maada welcomed the visiting team and said that Sierra Leone was once known as a center for quality education and for producing the best personnel across the continent. He noted that over the years, the country had lost its place but assured that they were ready to restore the past glory.

“We know that we cannot be part of the fourth industrial revolution if we do not have a literate population and that is why, as a small nation, we are determined to pre-position ourselves. As a government, we have resolved that we can change the old narrative. So, we need your knowledge and expertise as we embark on this journey. Education is what we want to give to every child and we are committed to that,’’ he said.