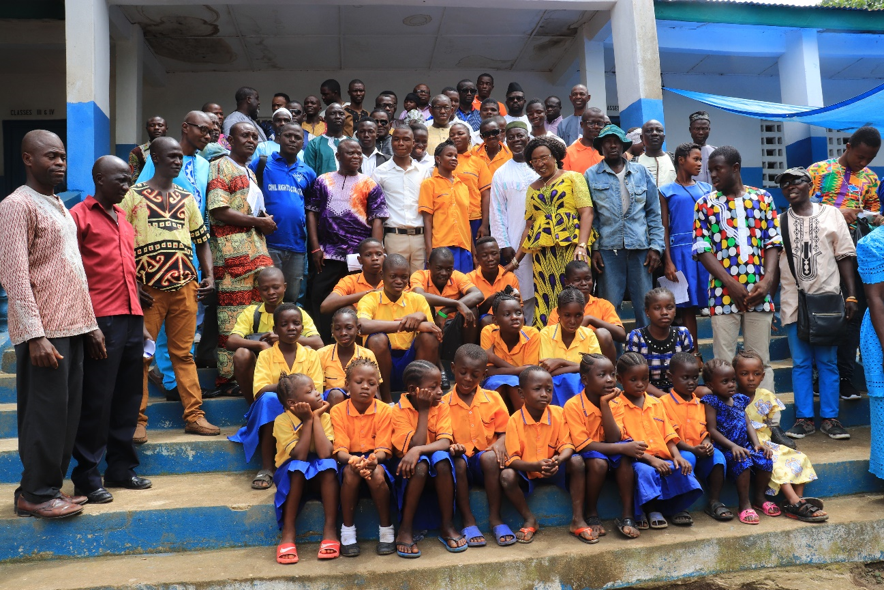 The Free Quality School Education (FQSE) program is the national flagship program of the New Direction government headed by His Excellency, President Retired Brigadier-General Julius Maada Bio. The President officially launched the FQSE program on August 20, 2018. Keeping to his promise to the people of Sierra Leone about developing the human capital of the country through education and skilled training, the President committed 21% of the national budget to the education sector.

On September 17, 2018, the Ministry of Basic and Senior Secondary Education (MBSSE) led by the Minister officially started the implementation of Phase One of the FQSE program. Considering that the New Direction government started the implementation of the FQSE program just three months after the President and government were elected, whereby the government inherited a battered economy shrouded in billions of bank overdrafts, internal and external debts, and the seeming lack of trust and confidence in a Sierra Leonean government by the international community, and especially development partners, it took the government very crafty innovation to have successfully implemented the FQSE program in the past year. It was evidently clear that the program needed a lot of resources to successfully implement it, but the public understanding of the economic state of the country created more doubts about the viability of the program itself. However, the government through the MBSSE and with the help of development partners put huge resources into the implementation of the program. In the past one year (2018-2019), the government distributed up to 94 containers of core textbooks in all core subject areas including Math, English Language, Science, Civic Education and Social Studies to pupils attending government and government-assisted schools throughout the country. The government also distributed about 12 million exercise books to children attending public schools. The government further relieved the burden of paying school fees from parents by paying up to Le43 Billion in school fee subsidies thereby providing the opportunity for families to address other pressing personal issues. The government, with help from development partners has also spent huge resources on furniture and school infrastructure expansion subsidies.

Having tackled some of the most pressing issues that underpin the success of the FQSE program, the government, through the MBSSE also realized that in order for the FQSE program to be sustainable and achieve its long term goal of human capacity development, that it is important to introduce early childhood development program where the MBSSE captures children’s physical, socio emotional, cognitive and linguistic development at an early age prior to primary education level. To this end, the MBSSE also officially launched the Early Childhood Development (ECD) program in 2019. As part of its priority agenda item, the Ministry has also raised awareness on girl-child education and has encouraged girls to enroll in school, stay in school up to at least the completion of basic education. The Ministry has also provided resources such as hygiene kits for girls to support them in schools. The Ministry is also at the advanced stages of finalizing preparations for the start of a national school feeding program. This program is intended to motivate children to go to school, eat nutritious food, gain energy, maintain their health and stay in school. Furthermore, though not part of the FQSE package, but rather a bonus, the government has also successfully introduced a national school bus system which children across the country are utilizing under stringent management by communities, local councils, youth organizations and the police to help them get to school and home with ease. Having also forecast the surge in enrollment of pupils in schools because of the FQSE program, the MBSSE proactively decided to approve more schools – about 3,041 schools were approved throughout the country in the past year. The government, with its understanding of the fact that the success of the FQSE program hinges more on the role of teachers has provided teaching and learning materials that help teachers to teach effectively and efficiently. It has also worked out modalities that address issues of teacher-pupil ratio, teacher re-assessment, teacher retirement and the condition of service for teachers generally. The MBSSE, through the Teaching Service Commission (TSC) has recruited about 5,000 teachers, about 3,600 on active payroll with the rest still being processed. The TSC has also successfully re-assessed 1,901 teachers.

On the overall, it is justifiable to state that the FQSE program has been a huge success. Considering the huddles and uncertainties that lied ahead of the program prior to its implementation due to the weak economy inherited by the government and the polarized citizenry that nurtured varying belief systems about national development, it could have been impossible to successfully implement the FQSE program had it not been for the determination, consistency, organization and professionalism exhibited by the government through the MBSSE. Today, more and more children including girls have enrolled in schools thereby removing the nurtured belief that education in Sierra Leone is not a right, but a privilege. It has also removed the myth about girls’ education in the country. Government has created huge awareness and better understanding about the relevance of the education of girls in national development. Parents and guardians have received huge relief from paying school fees and buying core textbooks for their children because government now pays school fees subsidies and supplies pupils with core textbooks in core subject areas at no cost. Many schools across the country have benefitted from school expansion and furniture subsidies and have used those subsidies to expand classrooms and buy more furniture. This effort will continue throughout the country to ensure that pupils are learning in a conducive environment. It will also phase out the two-shift system from schools especially in the urban areas so pupils can spend more hours in schools and use those hours to learn quality and relevant materials. Upholding the “Integrity” component of the FQSE program, the government through the MBSSE has uncovered examination malpractices as a serious issue that undermines government’s effort to develop the human capital of the country through quality education. Government is now working on strategies to remedy the anomaly. The introduction of a nationwide school bus system has been a huge motivation to children across the country. Children are motivated to go to school especially those who ride the buses. The effective management of teachers by the TSC and improving their condition of service is expected to have a positive impact on the FQSE program. The “Quality and Relevance” component of the FQSE program are in the hands of teachers. Hence, to uphold the component, the TSC in concert with the MBSSE has put certain measures in place. Teachers are now licensed and must be trained and qualified to teach in any of the approved schools. This approach has created the need for teachers to acquire the requisite training and qualifications and proper licensing to teach the right materials and conduct themselves in professional manners.

It is undoubtedly clear that the FQSE program has been met with some challenges. Phase One of the program implementation was focused on schools, pupils and teaching and learning materials. Phase Two is expected to focus more on addressing issues associated with teachers, especially government’s negotiation of their conditions of service. That continues to be a challenge. There is also the challenge of building more school infrastructures due to the surge in the enrollment of pupils across the country. Government will continue to need more financial resources to sustain the payment of education subsidies. Government will further need to provide lasting solution to the problem of examination malpractices if the “Integrity” component of the FQSE is to be effectively upheld. The effective monitoring of schools continues to be a challenge as the Education Ministry had gone for more than a decade with up to 400 vacancies in the Inspectorate Directorate. The FQSE program will inevitably need Inspectors and Supervisors of schools to robustly monitor an educational system that is expected to play a huge role in developing the human capital of the country. With the recent policy on pregnant girls attending schools, there is need to incorporate sexual and reproductive health education into the school curriculum to educate boys and girls on sexual and reproductive health, consequences of early pregnancy, and to proactively tackle any potential backlash from the policy. Since the FQSE program is for all Sierra Leonean children of school-going ages, it continues to be a challenge for government to determine the long-term plan for incorporating unaccompanied children, orphans and “street children” into the program. The program is to also do more to incorporate innovations that serve special needs children in schools. With the political will of the country, and the determination of government to develop the human capital of the country, these challenges are expected to be surmounted with the right attitudes, approaches and solutions. 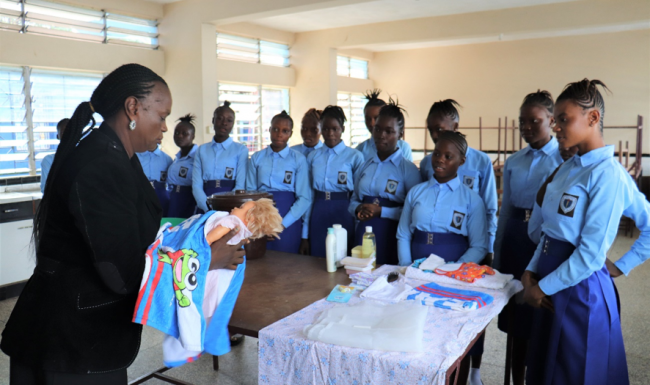 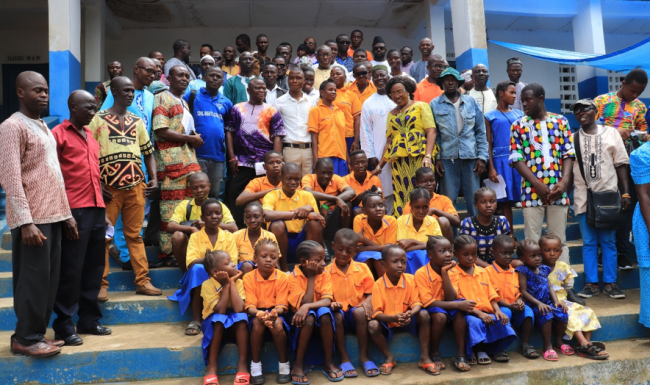 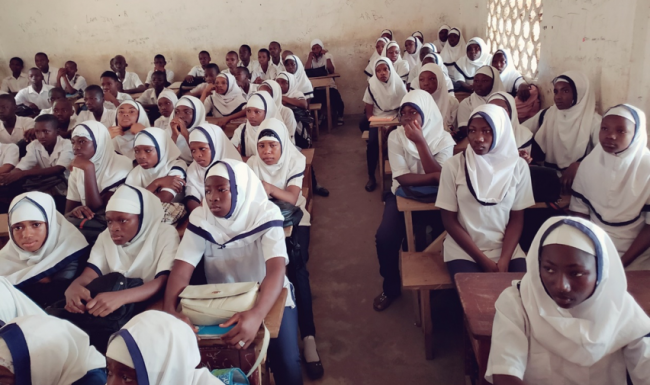